Giant pandas living in Japanese zoos are on loan from China. Let’s take a look at their history since their arrival in the Archipelago and talk a little about Hey Mei, the world’s oldest panda who continues to fertilize!

Even pandas born in Japan are sent back to China.

The Ueno Zoological Park in Tokyo received the first pandas in October 1972 to mark the normalization of diplomatic relations between Japan and China. The arrival of male Kang Kang and female Lang Lang triggers an unprecedented “panda boom” in Japan. After their deaths, female Huang Huan and male Fei Fei entered the archipelago in the early 1980s, followed by the birth of female Tong Tong in 1986 and male Yu Yu in 1988.

The male Ling Ling arrived in Tokyo in 1992. He traveled three times to the zoo in Mexico, which took part in a joint fertilization project, and his mating partner Shuang Shuang was also borrowed from the Hueno Zoo. But Ling Ling died in 2008, leaving no descendants. There were no pandas at the Ueno Zoo for the next three years, until male Ri Ri and female Shin Shin arrived from China in 2011.

A female cub named Xiang Xiang was born from their union in 2017, sparking another panda boom at Ueno Zoo. However, since the international trade in pandas is prohibited, all these animals are considered loans from China. Under an agreement between the two countries, any panda born in Japan must return to China within 24 months of its birth. If Xiang Xiang is allowed to stay longer than her original June 2019 return date, she will have to return to China at the end of 2021. .

“Big Daddy” in the kingdom of pandas

The panda breeding program at Adventure World, located in Shirahama, Wakayama Prefecture, has been very successful. Male Ei Mei, born in 1992, since 2001 successfully mates with his partner about once every two years. He arrived in Japan when he was two years old. In 2020, he became a father for the sixteenth time when his partner gave birth to a small male on November 22. (Eleven of his descendants were sent back to China).

The first partner Ai Mei did not give birth to offspring. Mei Mei, a woman who arrived at Adventure World in 2000 after undergoing artificial insemination in China, gave birth to a woman, Rau Hin, that same year. Subsequently, Mei Mei is impregnated four times by Ei Mei and gives birth to six cubs.

Ei Mei also had children with Mei Mei’s daughter, Rau Khing (whom he is not related to by blood). The period during which a panda can mate is only about two weeks, sometime between March and May, and to top it off, the period during which a female can be fertilized is only a few days. Thus, these factors make natural reproduction by the female very difficult.

However, in addition to Hei Mei’s exceptional fertility and intimacy with his partners, one of the reasons for his success seems to be the comfort of the living conditions he enjoyed, including a large exercise area. By the way, Hei Mei is currently 28 years old, which makes him about 80 years older in human terms. The birth of his last cub is a record that makes him the world’s oldest breeding panda. 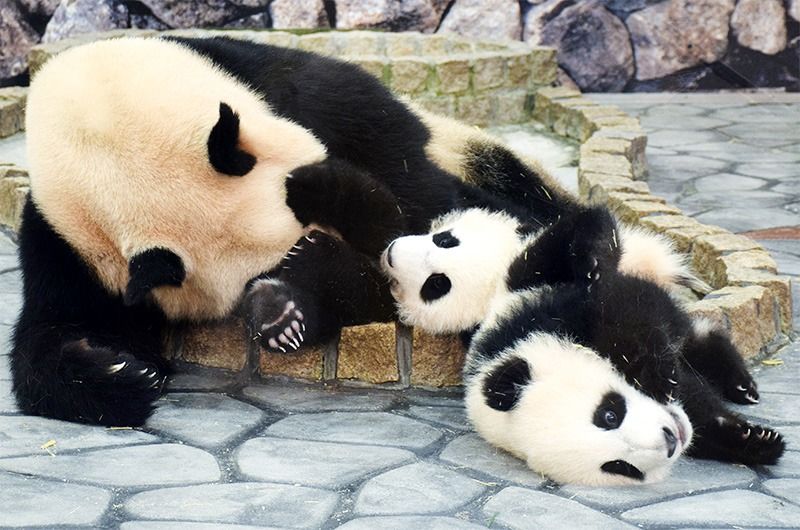 Rau Hin, mother of a large family at Wakayama Adventure World, with two toddlers in May 2015. (Jiji Press)

At the Kobe Oji Zoo, a pair of pandas, Kou Kou (male) and Tang Tan (female), arrived from China in July 2000 and were sent to help rebuild the city after the Great Hanshin Awaji (or Kobe earthquake). When Kou Kou was found unable to breed, he was sent back to China and replaced by a second male panda of the same name. Tang Tang gave birth twice, but one of the cubs was born dead and the other died shortly after birth, so she left no offspring.

The original agreement was that the pandas would remain in Kobe until 2010, but after the second Kou Kou died that year, it was decided that Tan Tan could stay longer. The Chinese side recently decided to send her back to China on the basis that it would be better for her to spend her last days in a satisfactory natural environment, but a date for her departure has not yet been set.

(Header photo: Opportunities to see Xiang Xiang were limited due to the closure of the Ueno Zoo for four months from February to June 2020 due to the Covid-19 pandemic. Jiji Press)