I don’t know about you, but we are with cuties, when they talk to us about Kung Fu Panda, we are all here to exclaim: “Oooh, topissime!”, as is our hero, marbled in black and white, the legendary Dragon Warrior, who has been slowly revealing his story to us since 2008. And he’s already defeated Tai Lung, the tiger who does grrr for a throw, Shen the peacock who pans with his evil cannons, and even the intimidating Kai with luminescent greenish eyes (who therefore has nothing to do with Lone Wolf for book lovers). of which you are a hero)!

Also, when Funforge informed us of the board game’s arrival… Crazy, crazy, crazy (not a game) we were! And now that we’ve played, a little throwback to the playful tour of the license that Modifius was considering. 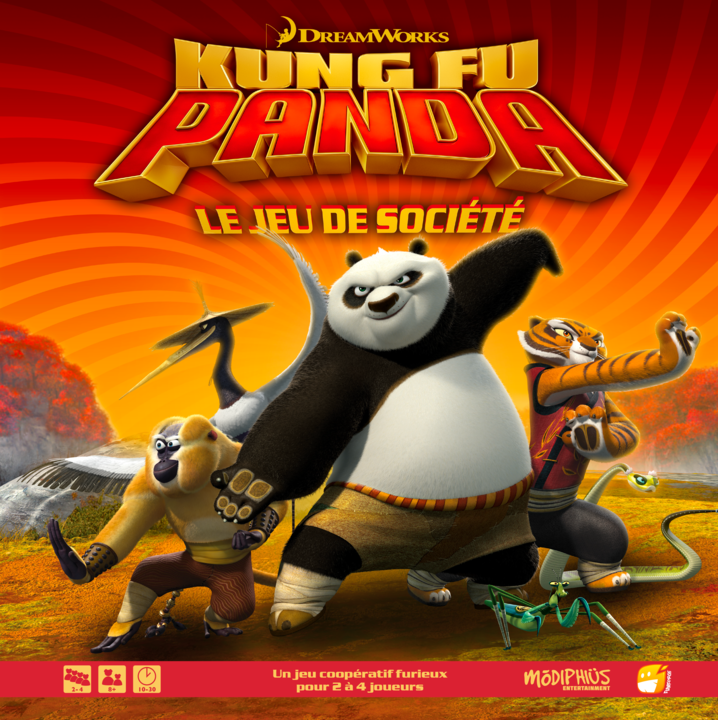 Presented as Co-op for 2-4 playersfrom 8 yearsgames are as lively (and intense) as Dreamworks animated films… There is no xiao long bao in the box, but 32 figures whose black fill has the effect of emphasizing several details and kung fu poses! Of course, all the heroes are there: Po and Tigress, as well as Monkey, Praying Mantis, Viper and Crane, each with their own game board and dice (no, forget the joke, it’s getting old)… Not to mention opponents, with 5 different types , Wolf Boss and Tai Lung in the lead.

Tiles with colorful illustrations will take you to the atmosphere of the animated films that we love to find, complete with tokens and cards that allow you to complete 2 tutorial missions and 3 chapters, each divided into three campaign missions. . 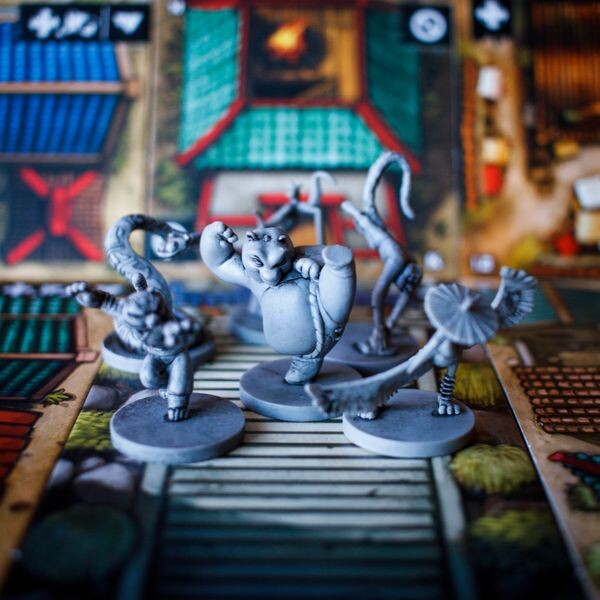 We said above that games are lively and dynamic… They last from 10 to 30 minutes, depending on the number of missions completed… Yes, because the game is played in in real time ! We talked about this recently with Project Elite, this type of game is not to everyone’s taste, but here, like in the choreography of licensed fights, you will frantically hook dice rolls to move, fight, knock down bamboo walls, activate mechanics and other actions specific to for the script. So of course you should like it! 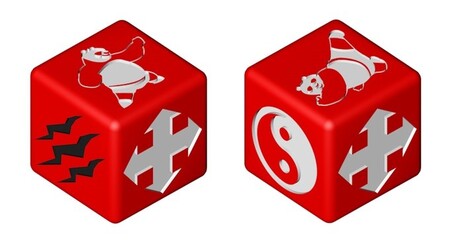 In fact, when you start a script, you will have a certain number of hourglasses to complete it. In “1, 2, Kung Fu!” from the start the dice are thrown in a frenzy, the dice are set aside for later, the dice used for punches, kicks or movements will follow each other… the movement is modulated by the tiles on the board: an extra foot to fly over rooftops or a kick to serenely move forward in the bamboo forest, etc.

Of course, opponents are not “only” stupid to wait for you and watch you, they swing their claws at you. Each claw symbol advances a marker for your other half of the playing field and, depending on the arrival square, adds opponents to certain squares of the “hello, we’re back” field; leads to the enemy’s response “and it goes bang-bap-boom! … Ouch!” ; or runs the special effects of the current scenario. 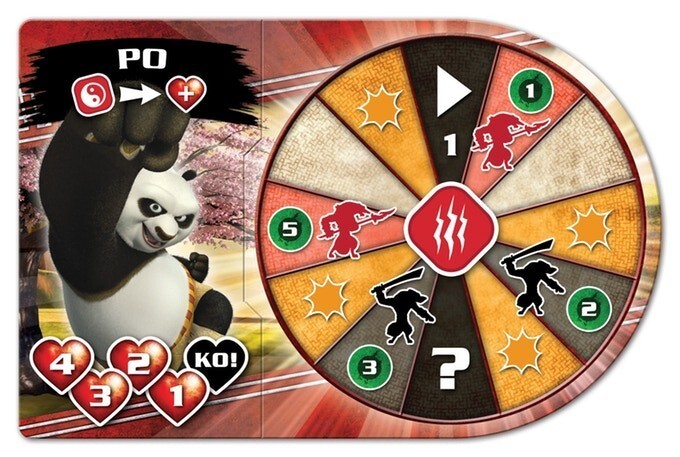 “chi” side has a somewhat special role, since if it is necessary for certain movements or actions, it is this side that also activates a certain power of each hero: Tigress shoots her fists from her, where Viper moves faster.

Since it is cooperative, it is possible to help each other when you are on the same field by sharing your dice: “Praying Mantis, Whirlwind of Death!” and finally, depending on the game mode chosen, you can find special moves thanks to reconstituted ravioli, which, again for the fans, will surely remind you of movie scenes. 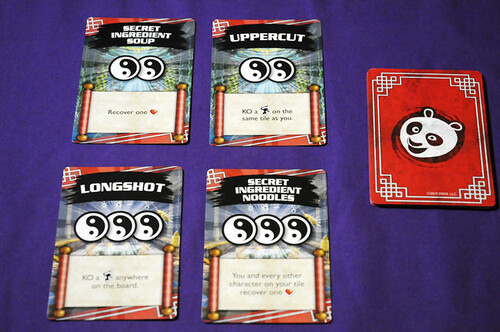 Simple grip lovers will play in “young master” mode chat without an hourglass and even play a little more turn-based, and, after the standard mode, expert mode see your wheels of fate turn with improved enemy recovery and increased pifpuffs. 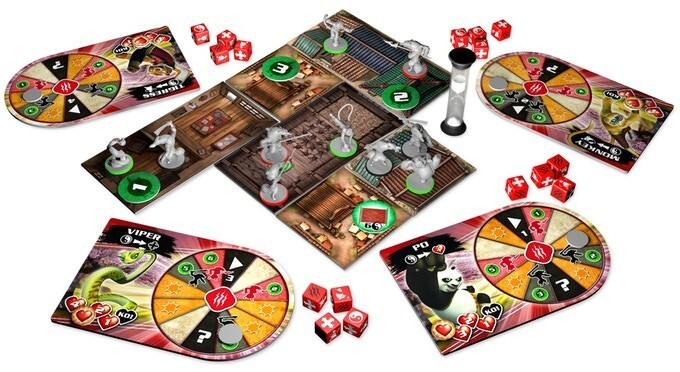 On introduction to the game and during the first games, the “furious” real-time side, which nonetheless fits in perfectly with the Kung Fu Panda action scenes, left us a little unsatisfied. We wanted to take advantage of what the other players were doing, instead of everyone in their corner throwing the dice like crazy, hoping not to cheat without doing it on purpose… And then very quickly, the atmosphere takes over and we start calling each other to help him break this wall that we can’t finish, we’re tired of taking a cart to go faster on the Great Wall… And we really take advantage of the breaks, the moments between two hourglasses, to “breathe and work out your strategy”… Again, just like in the movies. 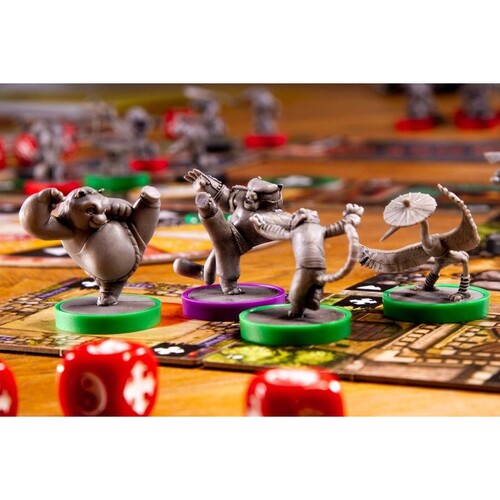 Quick games are easily adapted to the available game time, and, again, it is not uncommon to complete a chapter by connecting three chains. Last but not least, the (relative) simplicity of the rules prompted our 10 year old loulou to take over the game to explain it and get his friends to play it all alone… A real dragon warrior! 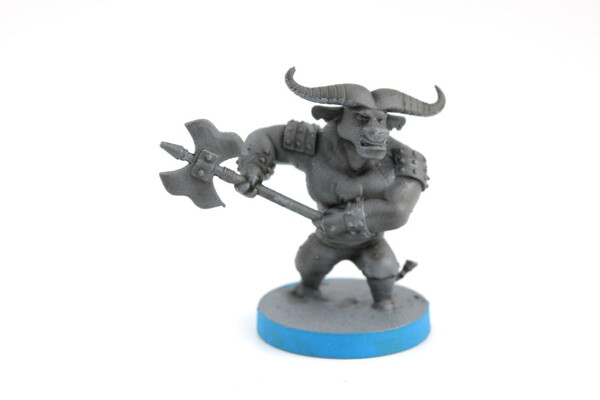 On the other hand, once again it must be said and repeated, you should appreciate (or at least not hate) real time dice rolls which bring both a certain tension (and a certain tension) and a particular frustration of not enjoying “the whole” game. On the other hand, and for those who appreciate this license, the dive is very high quality and fun! The parts and purposes, while a bit classic, fit the theme perfectly even with a few well-founded little mechanical surprises.

Congratulations to Modifius, who, after Thunderbird and before the arrival of Specter, once again proves that good licensed games are possible! And of course, thanks to Funforge for finding it!

ahh… why didn’t I make a kickstarter

for all these wonderful exclusives???