The pygmy rabbit is becoming an increasingly popular animal in French homes. However, despite the attractiveness of this animal, it is not as easy as it seems to raise it in good conditions and keep it in good health.

Indeed, the dwarf rabbit is a very fragile animal that requires a lot of attention as well as time to care for it. If, against all odds, adopting this little animal doesn’t put you off, here’s a complete guide to properly raising a dwarf rabbit at home.

What is a dwarf rabbit?

Contrary to what many people think, the pygmy rabbit is not an animal that exists in nature. Indeed, it is a “miniature version” of the common rabbit or wild rabbit (Oryctolagus cumiculus).

This type of rabbit has been the subject of selection in farms, in particular thanks to the ermine breed, which is smaller than other breeds of European rabbits, to obtain the dwarf rabbits known to us today, namely rabbits weighing no more than 1.5 kg.

Although the dwarf rabbit’s small size lends it a practical side to living in an apartment, this animal has a significant drawback: it is in very fragile health. Therefore, he will need careful care and presence so that he can live in good conditions.

The dwarf rabbit is lagomorph (not a rodent as the vast majority of people might think), herbivorous (feeds only on plants) and diurnal (living during the day). He has a lifespan of 7 to 10 years maximum, and the color of his dress can be the most varied, from white to brown, passing through red and two-tone. So there are dwarf rabbits for every taste.

How to properly care for a dwarf rabbit at home?

Despite its small size, a dwarf rabbit needs a certain amount of space to live a full life. For a single individual, you will need a cage at least one meter wide; the bigger the cage, the better. Feel free to take cages with two floors.

To fill the bottom of the cage, there are various suggestions that are suitable for a dwarf rabbit, but the most common are:

The cell itself should not be placed anywhere. In addition to the fact that the rabbit is very fragile health, the rabbit is an animal that is sensitive to stress. Therefore, it is necessary to place the cage in a quiet room where it is unlikely to be disturbed by other overly curious animals (cats, dogs, etc.). The room should not be drafty (bad for the health of the dwarf rabbit), should not be exposed to direct sunlight to avoid sunstroke, and the ambient temperature should be around 20 to 25°C.

Nutrition of the dwarf rabbit

The main food of the dwarf rabbit will be hay. He will need it at will, which will require a certain budget from his owner. It will be necessary to choose hay well so that it has good nutritional qualities: the greener the hay, the better it is. However, be careful, some brands use green filters on their packages to mislead the buyer about the quality of the hay. So be vigilant.

However, hay is not the only food rabbits need. He will also need either a mixture of seeds or pressed croquettes, sold in specialized stores, at the rate of a good handful in the morning and evening.

In addition to all this, mineral blocks are recommended to allow the rabbit to cut his teeth, as well as supply him with useful minerals for his body and, of course, fresh water at will.

Sociability and behavior of a dwarf rabbit

The dwarf rabbit is a sociable animal, so he will appreciate life with a relative. However, it is preferable to take two females or two males, because by taking a pair, you will get a lot of cubs that you will need to manage. In addition, the male runs the risk of tiring the female by wanting too much to breed.

The pygmy rabbit is also tolerant, as it doesn’t mind living with other species such as the guinea pig, to name just one that it will cohabit with without issue.

However, avoid him living with dogs or cats, at least until he is an adult and comfortable in his environment. Indeed, the latter may not be very delicate with him, because even without wishing him harm, they will subject the dwarf rabbit to stress. 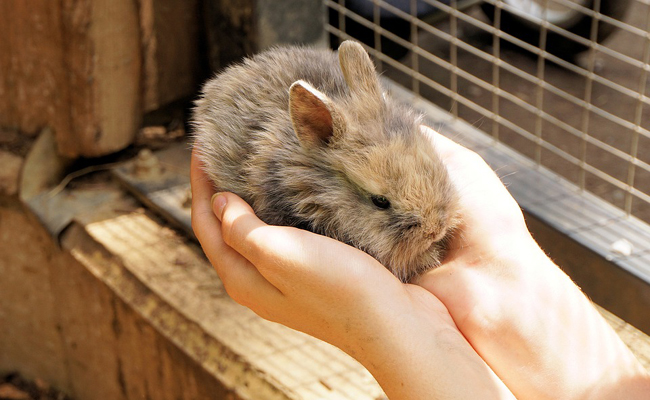 As a human, it will obviously be necessary to accustom the dwarf rabbit to your presence and your contact, but this must be done carefully. Initially after his arrival, he will need to be left alone to get used to his new environment, your presence being limited to taking care of his garbage, his water and his food.

As soon as you notice that he has become used to your presence, you can gradually begin to contact him: the first few days with quick light touches, without forcing him, then little by little he will develop until he wears it.

Once your rabbit is comfortable with his owners and environment, feel free to let him out of the cage so he can stretch his paws. However, be careful, like all rodents (even if there are none), he will be happy to gnaw on electrical cables, so he will have to be taken out under supervision.

Health of the dwarf rabbit

Therefore, the dwarf rabbit has very fragile health, it is also very sensitive to stress, which can cause illness in it, in particular diarrhea, which is fatal for these animals, since they completely dehydrate them.

When purchasing a dwarf rabbit, it is strongly recommended that you take an antidiarrheal medication at the same time, usually available in all pet stores.

At home, limit all sources of stress concerning him (too loud sounds or music, too many children around him, dogs or cats that are too curious around his cage), as well as drafts and excessive temperature changes are also harmful to his health.